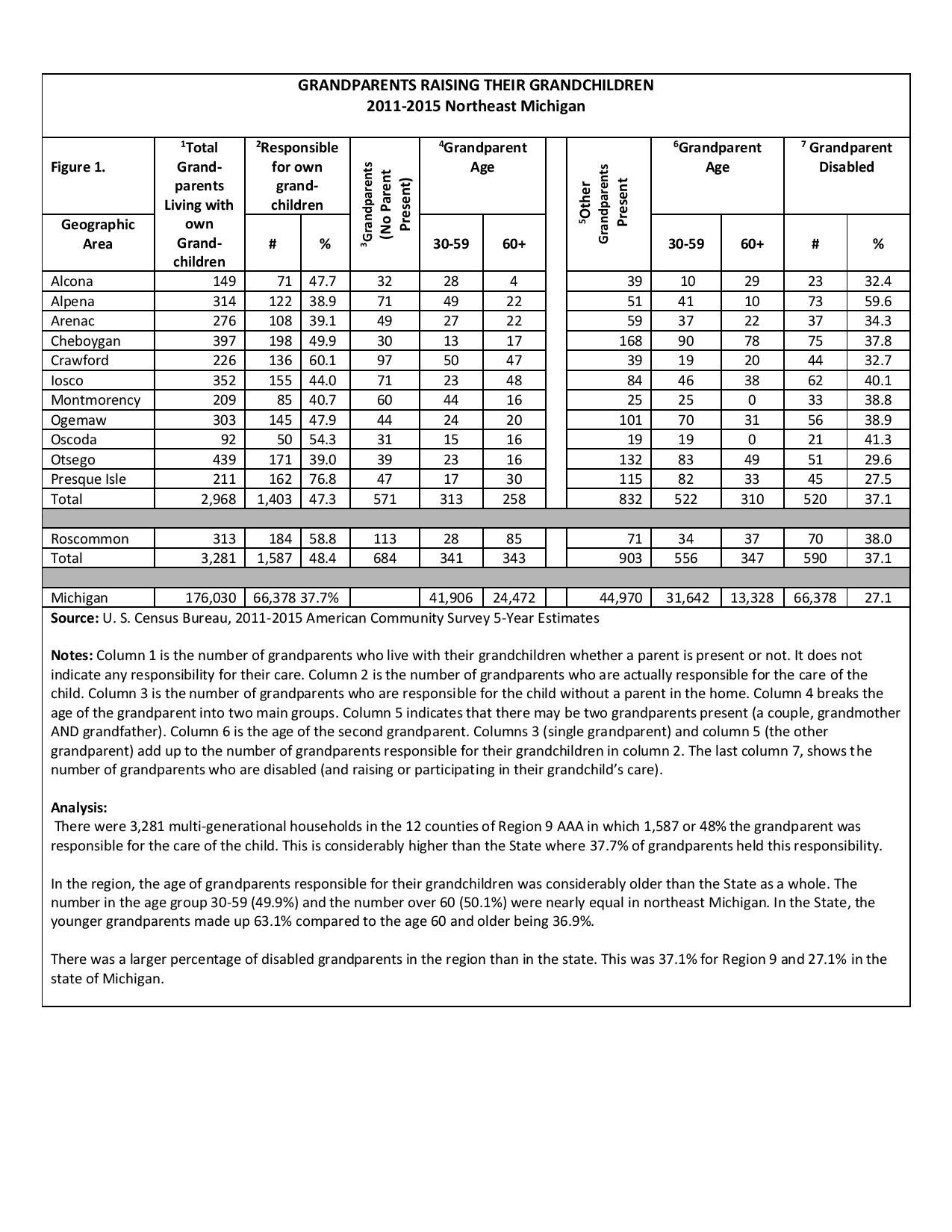 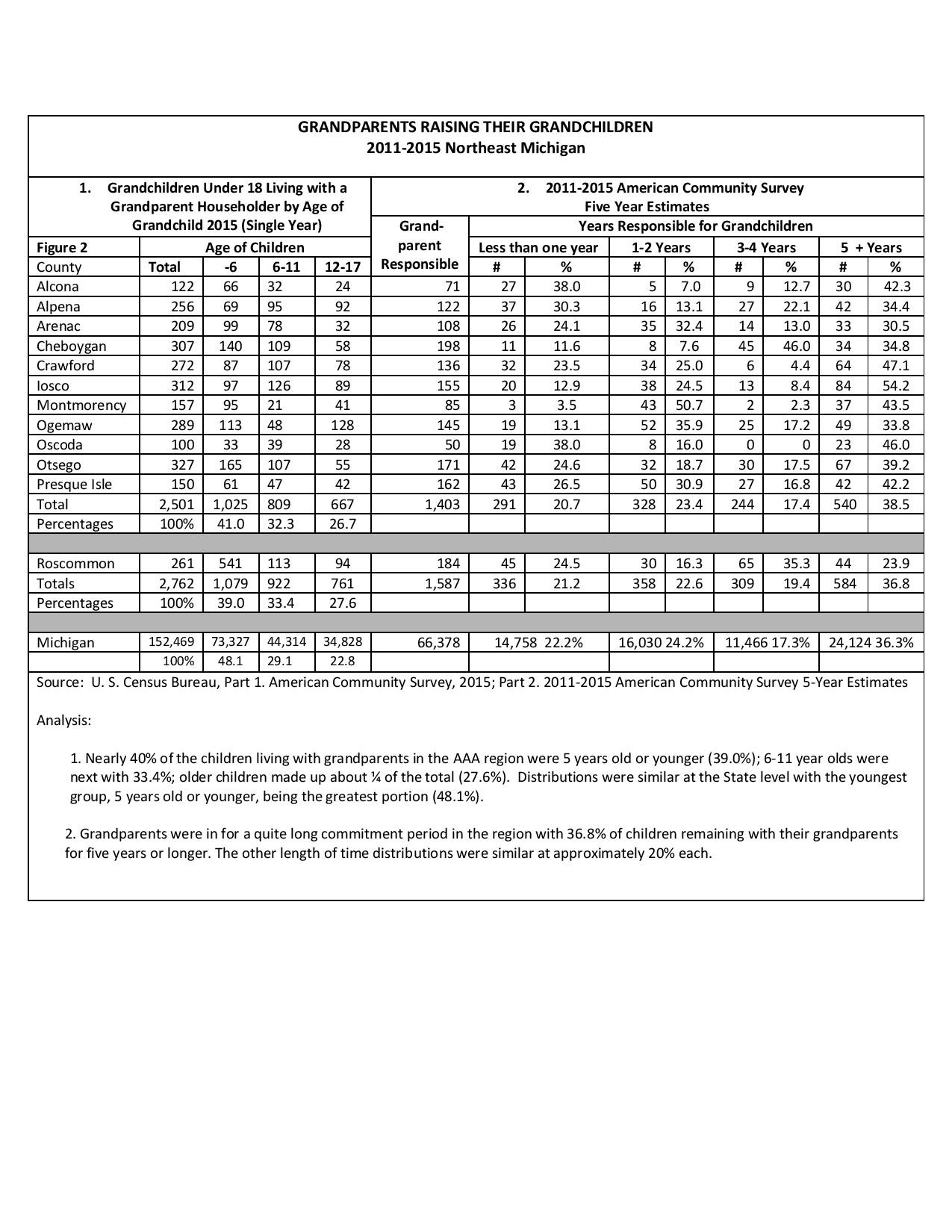 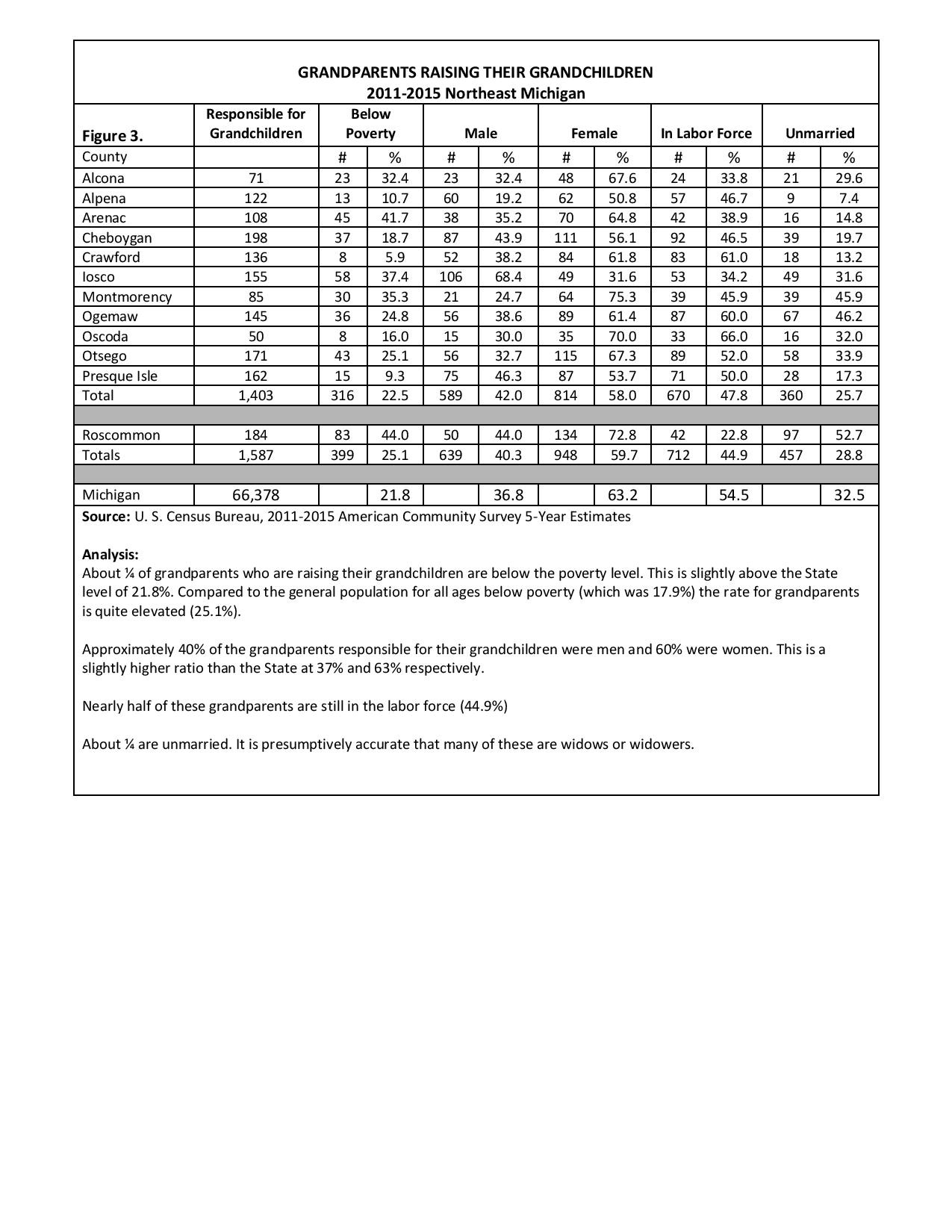 In the 12 counties that make up Region 9 Area Agency on Aging, there are 3,281 grandparents living with their grandchildren. Of these 48.4% or 1,587 are responsible for these children. In about half of these cases (43%/684), (where the grandparent has responsibility), there is no parent in the home.

Of the 684 grandparents with sole responsibility for their grandchildren, there is a 50/50 age split between age 30/59 (341) and 60 and older (343). Of the 1,587 situations where grandparents are responsible, about ¼ are unmarried (457, 28.8%). In many cases, there is another grandparent (the spouse of the one deemed responsible/the householder), also in the home.

Looking at gender, 40% of the responsible grandparents were men and 60% were women. In total 712 were still in the labor force (an educated generalization could be made that many of these are among the 341 who were between ages 30 and 59).

There were 590 grandparents or 37.1% who listed a disability. One quarter of the “responsible grandparent” households were below the poverty threshold. This was similar to the State of Michigan at 21.8% but considerably higher than the poverty percentage for the general population of the region which was 17.9%. Data was available regarding how LONG grandparents were responsible for their grandchildren. For those 1,587 who held responsibility, the length of that commitment was: Under one year, 336 or 21.2%; 1-2 years, 358 or 22.6%; 3-4 years, 309 or 19.4%; and those responsible for five years or longer, 584, or 36.8%.

The age of the minor grandchildren was only available for the multi-generational households where grandparents are living in the same home as their grandchildren. It was not recorded specifically for those who had the actual responsibility for the child.  For the single year 2015, there were 2,762 grandchildren listed in households where the grandparent was the “householder”. For those minor children under the age of 18, data is divided into three groups. The category Age 5 and under made up 39% or 1,079; age 6-11 had 33.4% or 922 children; and the older children, age 12-17 was the least prevalent with 27.6% - or 761 youth.

As detailed back-up for the summary above, this data is available and presented to the Board by county as well as for the 11 counties of the Community Action Agency territory along with comparisons to the State of Michigan. All data is for the average of the five years 2011-2015 with the exception of the age of child data which is for the single year 2015. All data is from the U. S. Census Bureau, American Community Survey.